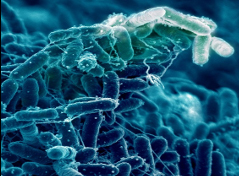 i) regulating the expression and/or activities of proteins involved in the control of iron concentration in plasma, such as hepcidin, ferroportin and ceruloplasmin, their links with non-iron metals such as copper and zinc, and the impact of chelators;

ii) the relationship between microbiota and iron overload disease to determine how digestive microbiota may modulate iron metabolism, and whether iron overload disease has an impact on bacteria virulence by studying oral microbiota that is easily accessible and will permit to study the relationships between iron overload, bacteria and lesions by focusing on periodontal diseases. The CIMIAD team brings together members from the previous UMR-INSERM 991 Iron and Liver team with members from the previous Microbiology and Infectious Risk (EA 1254) of the University of Rennes 1.

This allows an integrative approach by : i) using original in vitro and in vivo models, ii) developing original tools within platforms devoted to metal quantification, histopathology, bioinformatics and iii) operating translational research through interactions with the biological resource center and links with physicians (hepatologists, rheumatologists, odontologists), with special involvement of the Clinical Investigation center and of the National Center of Reference for Rare Genetic Iron Overload Diseases.